One day past our second anniversary
when the mountain
tried to take you from me.

A stranger at the door,
using the name
I still thought of as your mother’s. 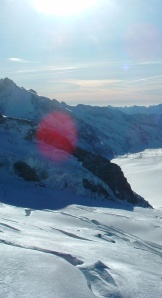 The stone weight of cold
punched the windows in

and swept me off the road – our life
streaming past with a
roar that I was
drowning in and
nothing anywhere for
me to cling to.

I waited in the wreckage
until the moon shone in my eyes
like headlights,

and I dreamed that you
were there, and safe.

Fallen stars, like shards
of glass,
settled in your hair.

This is still very much a draft, but one I’m pleased with. It’s a poem I’ve tried to write before, but never really managed. This attempt to write it was triggered by Read Write Poem prompt #17 – “Missing Something”, so once again I am much obliged.

I’m really curious to know what other people think it’s about. So, guesses?