That March night I remember how we heard
a baby crying in a neighbouring room
but found him sleeping quietly in his cot.

The others went to bed and we sat late
talking of children and the men we loved.
You thought you’d like another child. ‘Too late.’

you said. And we fell silent, thought a while
of yours with his copper hair and mine,
a grown daughter and sons.

Then, that joke we shared, our phases of the moon.
‘Sisterly lunacy’ I said. You liked
the phrase. It became ours. Different

as earth and air, yet in one trace that week
we towed the calends like boats reining
the oceans of the world at the full moon.

Suddenly from the fields we heard again
a baby cry, and standing at the door
listened for minutes, eyes and ears soon used

to the night. It was cold. In the east
the river made a breath of shining sound.
The cattle in the field were shadow black.

A cow coughed. Some slept, and some pulled grass.
I could smell blossom from the blackthorn
and see their thorny crowns against the sky.

And then again, a sharp cry from the hill.
‘A hare’ we said together, not speaking
of fox or trap that held it in a lock

of terrible darkness. Both admitted
next day to lying guilty hours awake
at the crying of the hare. You told me

of sleeping at last in the jaws of a bad dream.
‘I saw all the suffering of the world
in a single moment. Then I heard

a voice say “But this is nothing, nothing
to the mental pain”.’ I couldn’t speak of it.
I thought about your dream as you lay ill.

In the last heavy nights before full moon,
when its face seems sorrowful and broken,
I look through binoculars. Its seas flower

like cloud over water, it wears its crater:
like silver rings. Even in dying you
menstruated as a woman in health

considering to have a child or no.
When they hand me insults or little hurts
and I’m on fire with my arguments

at your great distance you can calm me still.
Your dream, my sleeplessness, the cattle
asleep under a full moon,

and out there
the dumb and stiffening body of the hare. 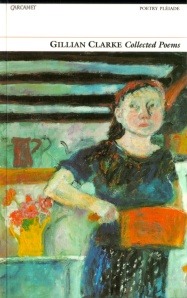 Gillian Clarke is a Welsh poet, playwright, editor and translator, and one of the most important figures in contemporary Welsh poetry.

Her work meets with critical as well as popular acclaim – her last three books have all been Poetry Book Society Recommendations, and her poetry is studied by GCSE and A Level students throughout Britain. As well as being an indefatigable member of the GCSE Poetry Live team, she created the Sheer Poetry resource website with Carol Ann Duffy. She is also a tutor for the MPhil in Creative Writing at the University of Glamorgan (was my tutor, in fact!), and in 2008 became the third National Poet for Wales.

She is a poet of the primal – the Welsh landscape both as setting and subject, as well as themes of war, womanhood and the passage of time. This poem, from her fifth collection, is classic Gillian Clarke: definitely a woman’s poem, but for (and about) real women, and real lives. So there is blood, and sex, and death. As always in her work, this poem is about connections, and about realities. A wild, harsh beauty in the imagery, and a web of sound that holds the whole thing together. Finely crafted poetry that is fierce, passionate, and unflinchingly honest.

For more Tuesday Poems, (including a poem from Gillian’s most recent collection) visit: http://tuesdaypoem.blogspot.com/.

One Reply to “Tuesday Poem – “The Hare” by Gillian Clarke”