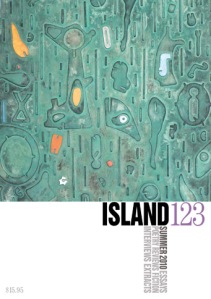 After many years of trying, two things have finally happened. I’ve got my drivers’ licence (don’t ask) (no, really), and I’ve had a poem published in Island!

For those of you who don’t know it, Island is a gorgeous literary journal, published in Tasmania. I’ve been submitting there for quite a few years, and although I had some flirtatious (purely in the literary sense) correspondence with Anthony Lawrence when he was editor, the closest I’ve managed to get – until now – was a ‘sorry, no, although we thought “X” was interesting’.

The poem they’ve taken is one of my longer ones. It came from an exercise I gave my students fairly often: take a cliché (or phrase, or saying) and look at it literally. Revive the dead language. Make it come alive. And while I was talking my students through it, I got a sudden tickle. The saying was “a bird in the hand”, and it struck up a chime with something I’d read in Ruth Padel’s marvelous book The Poem and the Journey, in reference to RS Thomas’s poem “Blackbird”. As part of the commentary, she mentioned that the medieval Latin name for the blackbird – ‘merula’ – means ‘the dark girl’, an is an image of isolation, of solitariness. Solitude plus a blackbird sent me to the legend of St Kevin – avoiding the Seamus Heaney poem on that subject until well after – and that’s where things began to take their own turn.

It’s another poem with lots of bits of myth mingling with each other. (Feel free to see how many you can identify!) I loved writing it, and I was seriously pleased to have it picked up by a mag of this calibre. Hope you enjoy.

A Bird in the Hand

1.
The tale told afterwards
was of his chastity –

how he’d forced a young woman
into a bed

to douse her ardour
he said.

2.
Merula, the dark girl with golden eyes
who came to his hand
like a bird

her lips against his lips
a sacrament

her fingers as light as fimbria,
her feet
bare and barely leaving a mark

3.
She led him
into the underworld
– this he knew
as he knew her.

She opened for him
the flesh

of a pomegranate,
told him to sip, taste
take.

He fell with the world
into winter.

4.
And afterwards
was the tale of the blackbird
who’d built a nest
in his outstretched palm

dark hair tangling
with his own,
the blood in his ears
like the beating of wings

his broken sky
the blue

4 Replies to “At last, Island”