There is in each of us a stream of tendency, whether you choose to call it philosophy or not, which gives coherence and direction to thought and action. Judges cannot escape that current any more than other mortals. … We may try to see things as objectively as we please. None the less, we can never see them with any eyes except our own.
– Benjamin Cardozo, ‘The Nature of the Judicial Process’ (1921).

No judge writes on a wholly clean slate.
– Felix Frankfurter, ‘The Commerce Clause’ (1937).

After a couple of days of pondering, I have a shortlist. From 600, to 105, to 32. Almost there, numerically. But the biggest part of my job is still to come.

which appeared in the taste of nashi. (Those of you who are puzzled by the final line, try this link. We’ll wait.) As well as the neat reference to magpies’ habit of stealing shiny things (more common among British than Australian magpies, but still relevant) in ‘borrowing’, there’s also the link to a piece of New Zealand cultural history. Not bad for seven words!

Anyhow, that was the purpose of my morning’s reading. Very interesting to see how the typical New Zealand style of haiku has evolved – my red-pen was a lot twitchier reading the early anthologies than the more recent. But it was also useful to remind myself that there is no possible way I can select haiku that everyone will agree deserve the places I give them. It’s something I’ve learned to accept as an editor – although I must confess that it caused me a huge amount of stress first time round. But that’s the nature of the beast – your judgements are inevitably coloured by your own preferences, just as much as by your knowledge. The best you can do is be as rigorous as possible – ask yourself rude questions like “are you responding to the poem’s merits, or to its subject?” and “is this pulling your strings, or are you being objective?”. (Ok, the actual rude question is “are you being a sentimental idiot?”, but sometimes I try to play nice.) 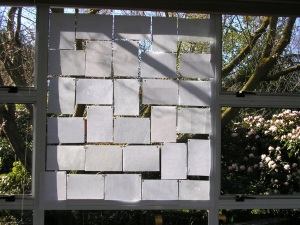 Those questions are the ones I’ll be hammering away with for the next week. To get to this point, I had to reduce my 105 down to an actual short shortlist. How? Blu-tack, and a large expanses of window …

Let me explain.
I took my stack of poems, and began blu-tacking them to the windows in our conservatory (aka the room where I do my writing. What it lacks in insulation, it makes up for in views). I began by putting them up direct from the pile. When I’d filled the space (thirty poems), I started the challenges. Take the next poem in the pile, and compare it to the ones on the window. Better than one of them? It takes the other poem’s place, and the defenestrated poem goes to the bottom of the stack. Repeat, until there’s no more movement and every poem in the stack has had a good half dozen runs.

Then I tried to think about tiers again. Which poems were (currently) duking it out for places one to five. I managed to get that down to six poems, so they took a pane of their own. Then the poems that were not quite up to the standard of my big six, but which felt a shade better than the rest. They went into another pane, and can be thought of as potential Highly Commendeds, with the remainder as possible Commendeds (and five over). At that point I took a break in the garden to discuss my selections with the chooks.

When I came back inside, I went over the poems yet again, thinking about what they technically did. What are the levels of meaning, what depth is there? How do I feel about them, which five could I cut, and were there any that deserved to be higher or lower than currently rated? A couple of poems shifted sideways. Then I went through the discarded ones again, looking for anything I’d missed. I knew I’d need to keep some extras, just in case my final selections included poems that ended up being disqualified because the poets did something stupid like submitting them to be published elsewhere. (It happens. It still happens. Every damn year there’s somebody.) So a fourth windowpane was brought in to the equation – backup poems, the ones I could’t quite cut yet. With that option available, two more returned from the pack, making a shortlist total of 32 poems.

The whole challenge process was repeated a couple more times before I called it a wrap. I was pretty satisfied that those poems were the ones, so I made notes in my journal of which I’d picked, and started to jot down some whys. The interesting thing is that all six of this top tier were poems that made the cut in the very first read through, the day that they all arrived. Two of them were in my very tentative first ”me like best” list; two from the third ranking; and two from the fourth. I’m not sure what conclusions, if any, can be drawn from that. Hopefully that I’m still judging to a reasonable standard even when doing so very superficially, but that I’m managing to stay reasonably flexible, and open to reconsidering my judgements.

So now the hard work starts. Taking each of my thirty-two poems, and essentially doing a close reading of it. Getting inside it, and seeing what I can find there. Taking it out for a slap-up meal, maybe a little wine, a movie, and seducing it and taking it back home to rummage through its drawers and wallet while it sleeps the sleep of the happily intoxicated. Then going back out and performing the same dance with the next. And the next. (Which sounds ever so slightly Erin Brockovich …)

One Reply to “Eyes and clean slates – a shortlist is born”