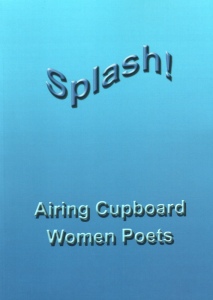 Twenty years ago, four women met in a room little bigger than a cupboard, to air their poems for the first time …

Or as founder Karen McNabb put it in her speech last night, “to share inspirations, aspirations, and desperations”.

Yesterday was the Airing Cupboard’s 20th anniversary party, and the launch of the Airing Cupboard’s fourth anthology: “Splash”. A really good crowd turned out for the launch, with Bernadette Hall the guest speaker. In honour of the occasion, Bernadette composed a cento of lines taken from various of the poems – it actually made a pretty decent poem! And of course sent everyone to pour over their copies of the book to try and find where the various lines had come from. (The “sagging breasts and testicles” come from page 21, Pat Daley’s The March against Time.)

Twenty years! I owe a huge debt to the Airing Cupboard. Joining them back in 1999 was genuinely life-changing. The chance to meet other poets (including some who’s work I’d been eagerly devouring for quite a while) and learn from them, in a supportive, safe, positive environment. Just being in a room with other people who had also made that leap from writing poems in secret to answering “what do you do?” with the P word … it was joyous. I know that sounds a bit corny, but it really was. And so many of the people in that room described the moment of telling their families what they did in the same way – as “coming out of the closet”. Oh boy, did that ever describe how it felt! So Airing Cupboard meetings, two precious hours every second Friday, were a chance to say it loud and say it proud – I am a poet!

I was a member for (I think) four years. So there were plenty of faces that I recognised. But way more that I didn’t, which was fantastic. It really hit home just how wide spread the influence of Airing Cupboard has become – a high proportion of the regulars at the Autumn Poetry Readings were in that room. Poets with multiple books behind them, poets who are involved with publishing, on committees of other important cultural organisations, poets who have gone on to become fixtures in New Zealand poetry. I suspect you could play the “six degrees of separation” game with virtually any figure in the New Zealand literary scene, and find an Airing Cupboard connection within a handful of links.

They gave me permission to write. To find my own voice. Then to develop it. It was the most precious gift anyone could have given. Airing Cupboard was my nest – a place to experiment safely. To fail safely – and if you can’t risk failure, how do you ever grow?

Bless you, Airing Cupboard. Go well. May you thrive for another twenty years.