I came across an article on the Sydney Morning Herald website about a brilliant idea – coffee shops having a Poet in Residence.  Actually there are a lot of good ideas in the article, including  a couple I recognise from Gary Mex Glazner’s How to Make a Living as a Poet. I’ve often thought that the NZ haiku community could use the poems-on-pillows option. Of course we’d first have to get ourselves some sort of national organisation … at the moment we’re lot of regional  groups, plus Sandra Simpson’s stirling work maintaining Haiku NewZ on the NZPS website. Organising poets has way too much in common with herding cats …

Couldn’t resist. Back to the SMH article. It chimed with something else I’d read about recently – the rise of the “coffice”. Apparently there’s a thriving subculture of people essentially using coffee shops as office meeting rooms, and conducting their business there.

It’s hardly a new idea – artists and writers have been using coffee shops as places to hang out and talk, as well as to write or draw – such conveient tables! – for practically as long as coffee shops have existed. But some coffee shops are happier than others to have their tables occupied by people scribbling on bits of paper all afternoon. Most are happy enough as long as you’re buying food and drink, but they do tend to get a bit grumpy if you’re there for more than a couple of hours. The etiquette is a bit tricky. If it’s ok for a couple of friends to meet and talk about poetry, is it also ok if those friends spend some of the time writing, rather than talking? What if one doesn’t buy anything, but the others do? Or if some of the people are paying one of the others for whatever they’re doing? Could I, for example, run a one-off Reading for Writing class in a coffee shop? Yes? No? How about a series of them? More ok? Less ok?

Maybe there should be some sort of sign that a business could hang up somewhere, indicating their willingness to be occupied by writers. A bit like those signs you sometimes see indicating a particular stance on cellphone use, or breastfeeding.

Or, at the very least, an underground list somewhere of coffee shops with staff who are sympathetic to bards in need … 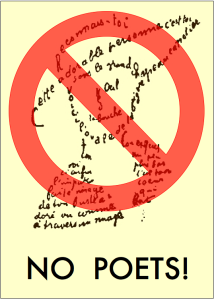 2 Replies to “Coffee, the coffice, and poetry”

Our annual look back at the previous year via the lens of The Best American Poetry, The Best Canadian Poetry in English and The Forward Book of Poetry.

A combination of discussion and writing exercises, suitable for all levels. And now with three venues!