A mistake. An error of judgement. A penalty
brought against a quiet city. Stroll
through the park, lunchtime almost over.
A defect, a small disappointment. A summer day
laden with clouds, grey light that softens the walls,
the stone and brick, the glass. Less
than expected. Someone to blame. A sparrow
rests lightly on the hand of a statue. A weakness
in the system, communications break down.
A telephone rings into silence. A refusal. Dispraise, dis-
continuity, lateral displacement. A woman
leaves a cafe, checks both ways, crosses the street.
An unthought response. A vice. Students
repeating the phrases – Good Morning, Good Evening, Good
-bye. It is nine o’clock, it is ten to eleven. The time
is twelve fifty-one. 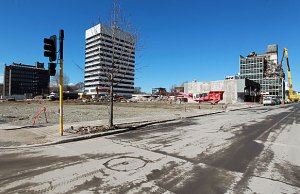 In a (possibly pointless) attempt to avoid appearing completely narcissistic, I try to avoid posting my own pieces on Tuesdays. But on this occasion, it seems warranted.

It’s very much a poet’s poem, this one. Most people are impressed / moved / bludgeoned into an emotional response by The City and the City, which is … understandable. It is probably one of the most overtly grief-filled poems I’ve written, and I think (or hope) that the truth of it carries it above accusations of emotional manipulation. I certainly had to use my full bag of tricks to keep it controlled enough to be readable.

But this is the one that I’m prouder of. Because it captures that moment, one year ago when we discovered that our September nightmare was in fact just the pricking of our mental and emotional thumbs. It doesn’t pack the same immediate punch, but it’s been the one that has had people come back to me later and say things like “you know, that’s actually a damn good poem.” Fundamentally it’s a continuation of something that has become a bit of an obsession of mine – that way language slips, the way it changes and stretches and fails to hold. The way experience sifts through it, and leaves traces behind. (I did say it’s a bit of a poet thing.) All the words that now have entirely new resonance for us in Canterbury. They’re a bit like the earth itself – ringing with the echoes long after the event has happened.

I doubt I need to tell anyone either inside or outside Canterbury that things are just not going well. That people are still really struggling, especially in the eastern suburbs. Virtually no rebuilding has gotten underway yet. We got our official “Scope of Works” document for the damage to our place in mid January. It began ‘We have recently completed the inspection of your property …’ Recently? Try three months after. (We were supposed to get the damn document within four weeks of the inspection at the absolute latest.)

Welcome to the CERA timescale. Based on geological time, apparently.

But we’re still so much better off than a large proportion of people in Canterbury. We’re still not allowed to actually do any repairs yet (or even repaint … argh), until they have sorted something or other out. And there is no cost estimate provided for any of the jobs listed on the Scope of Works document, so we can’t even start asking around to try and organise local tradesmen, or tackle small jobs ourselves, or make plans of any sort. We just have to wait. But our house is dry, clean, and no wonkier than it was a year ago. We’re lucky. And we know it.

But … tomorrow is going to be hard. Driving home the other day, they were promo-ing the upcoming news special on the quake anniversary on the radio. They played an excerpt from the interview that was being recorded in the Radio NZ building when it struck (can’t find the link, sorry), and if I had been the one driving, we would have run off the road. I can’t listen to it. I start shaking and crying. Stupid, but there it is.

Actually it’s worse than that. For the last few weeks, I’ve been really really jumpy. Partly because they’ve been harvesting peas down the road, so there have been extra trucks rumbling by at unusual times. Worryingly, I find that if I let my mind wander, I get a strong mental image of a really big shake. And it accommodates itself to wherever I happen to be at the time – the room changes, or the building. It’s not just visual either – I can hear the sound of the nails squeaking in and out of the framing, and glass shattering, and that horrible rumbling roar. It’s as though all this is happening in some compartment of my brain, and I have to be really strict about not letting myself drift that direction. Mad, I know. But it feels real. Sounds real. I keep turning my back on it and saying “no!”, in a loud, firm voice, like you would to a dog. So far I’m winning. (Well, I haven’t actually spent time curled into the foetal position, whimpering. So that’s a win, right?) I guess it’s just stress. All I can really do is ride it out. And restock the emergency supplies.

I know that geology doesn’t know anything about the Gregorian calendar, and that the significance of tomorrow is purely a human construct.

But I still plan to be outside with the chooks at 12.51 tomorrow.