One of the things I’ve discovered this year is the joy of citizen science. For those of you who aren’t familiar with the concept, it’s a way of putting the vast connectivity of the internet to actual use in solving scientific problems. No, not in the sense of using the wisdom of crowds to somehow make collective-genius breakthroughs. Something far more mundane, and also immeasurably more accessible to even the least scientifically literate among us: doing a share of the grunt work.

The reality for most science – certainly in research – is that collecting data is both a problem and a solution. Without data you can’t learn anything much – ok, you can theorise, construct elegant (or just plain weird) hypotheses about the how or why of some particular thing. But to test your hypothesis you need data. You need to see if the way things happen in the real universe matches the predictions your hypothesis … um, hypothesises. Or maybe you aren’t even at the point of coming up with anything vaguely testable – you’ve just got a heap of data (weather readings, telescope images, historical documents, squiggles on maps, strange sounds from the attic etc) and a lot of questions that may or may not be anything much beyond a generic feeling of WTF?!

Modern methods of data collection have meant that the potential amount of information Out There, Just Waiting to Be Noticed is almost unmanageably huge. Option One is to have the scientist themselves go through everything. Except this would probably require a rewriting of the laws of space and time, and make damn sure they never get anything else done. Not the best use of a scarce resource. So traditionally this sort of scut-work – doing a preliminary sorting through of the data, flagging anything interesting and generally winnowing the mountains of harvest into ignorable chaff and a few precious bushels of potential wheat – would be allocated to graduate students. And for a long time that was the best solution people had.

I first heard about the concept of citizen science after listening to an episode of Life Scientific, with Jim Al-Khalili interviewing British astrophysicist Chris Lintott. I highly recommend you go listen to the episode (and all the other Life Scientifics – they’re fascinating), but in a nutshell the problem he faced was that he had a stonkingly huge number (900,000) of images of different (and never-before-seen) galaxies, and needed some way of sorting them into manageable categories. To give you an idea of the magnitude of the task, they calculated that a graduate student working 24/ 7 would take at least three years to classify all the galaxies in the sample. And that’s doing it once through only, and missing who knows what.

Chris had heard of a project that had enlisted volunteers from the general population to look at images of cosmic dust online, so decided it should be worth a try – galaxies are at least as sexy as dust, surely? So they launched Galaxy Zoo, a website that walked ordinary people through the process of sorting galaxies into different categories. Simple steps, and the intention being that lots of people would be looking at (and classifying) every image, so individual errors should get smoothed out by the weight of numbers (the whole Wisdom of Crowds thing, which apparently does hold true).

The bit of brilliance was that Chris and the others who designed Galaxy Zoo realised that what they needed wasn’t knowledge of astronomy, or galaxy formation. It was simple pattern recognition. Matching this shape to that one, or that one, or something a bit like both. And this is something that humans do easily, and much much better than computers. The scientists hoped they’d be able to get 20,000 or so people to take part, and maybe get most of it done within a year.

Within the first 24 hours of going live they were getting almost 70,000 classifications an hour, and had the whole thing done (averaging 38 classifications per image) in a little over five months.

That was back in 2007. I only discovered Galaxy Zoo a year and a bit ago, but it and projects like it have been a mild obsession ever since. Being married to a scientist, I know how much value there is in this sort of thing – it genuinely does help. And it’s fun – some of the images are weird, some are cool, and some are heartbreakingly beautiful.

If galaxies aren’t your thing, there are heaps of other options on Zooniverse (the main ‘people-powered research’ website). I’ve classified galaxies for Galaxy Zoo; deciphered old recipes for Shakespeare’s World; identified animals for Computer Vision Serengeti; and classified glitches in readings gravitational wave readings from LIGO for Gravity Spy … and my favourite recent project is one that seems to good to be true: looking at animal faces. The cuteness is unbelievable, and the best wet-week-blues buster I can think of.

And I’m doing it for science!! 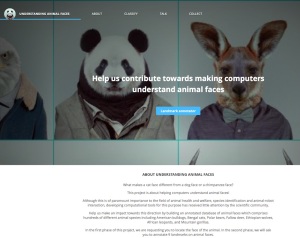