Well that’s another swathe of plans sent down the porcelain gullet!

Here I was, one class down, the second not due to be taught until May (leaving a comfortable amount of time to do some research, some gentle and leisurely reading, and maybe even some actual writing of my own), being very good and diligent and organised when the universe instead decides that the best way to remind me of my place is to visit the planet with a new plague.

A fortnight ago I opened up enrolments in the next class – a Reading for Writing course, looking at the poetry collections shortlisted for the Ockhams.

Two days later I got some warnings from a few people that perhaps I might want to hold off a little if I hadn’t confirmed the room hire yet, as you know, things in May might be a bit complicated, what with this new virus doing the rounds.

A day after that I had a friend with a medical degree repeat that in firmer language. And heard that there were lots of travel bans being put in place for businesses. And countries.

A day after that, I was told that a number of businesses and research organisations were being tasked with finding out how easy it would be for their staff to work from home in the event of something unexpected. You know, for a couple of days, or may be even a week or two. Just in theory. (Hey, we’re Cantabrians – shit happens. Being prepared is sensible.)

Then it was Friday, and the rumblings around the world became more ominous. When Stewart got home we decided that things were more likely than not to hit the point where he would need to work from home, at least sometimes. So we spent the weekend setting up a small room as an emergency office for him, away from my writing space.

Then Monday came, and we were given 48 hours before the country went into lockdown. 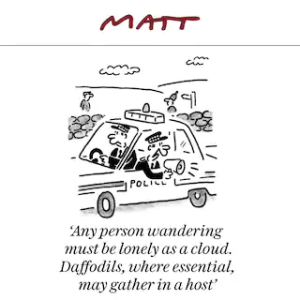 Thanks to my very brave guineapigs, I’ve managed to work out how to use tele-conferencing software to run an online class. So that’s where I’ll be teaching next: in the clouds! Untethered!  Free! FreeeeeeeeeEEEEEEEEEEEEEEEEE!!!

Jokes aside, I know how scattered and frightened people are feeling right now. So one thing I can do for my community is provide a place for people to come together, even if only virtually. It felt really good to see each other.

So for the next however long, I’m going to run online classes on the weekends. Only a couple of hours probably, and maybe only on Saturday mornings (unless there’s a call for other times – let me know!).  For free, at least initially. On Zoom. (Not just because of the name. But I admit it doesn’t hurt.)

Because April is NaPoWriMo, I’m going to try to post a new poetry writing exercise on this blog each day for the month. The on-blog exercises as a gesture to the wider poetry world, and the workshops as a gesture for my own poetry community. I’m still learning how the online-course thing works and doesn’t work, so those will be works-in-progress, and a bit chaotic. (Hence – at least in part – the price.)

If you’d like to take part in the weekend sessions, hop over to the Current Classes page and sign up. You don’t have to be in Canterbury to take part, or even to have come to one of my classes before (although people on my mailing lists will get first dibs in the unlikely event that I get unmanageably vast numbers of people wanting to take part).

We live in dark times. But then, someone always does. And one thing I’ve learned from the earthquakes and the years following is that there will be survivors. Yes, loss, even seemingly unbearable loss. But somehow, somewhen, somewhere, there will be an afterwards. We just have to keep heading towards it.

And wash your hands.